Nachfolgend können Sie den Artikel in Englisch oder Deutsch in Textform lesen, oder das PDF auf Deutsch herunterladen.
Below you can read the article in English or German in text form, or download the PDF in German.

Monika Majer sees her craft training as the basis for artistic work. In her workshop in Kirchheim unter Teck, she creates flowing soft forms that not only children like to touch. One of the stonemason’s aims is toconquering public space. She is currently looking for investors.

Lost in thought, Monika Majer strokes the diabase she has placed on a wooden platform in a gallery near Stuttgart.It is part of the exhibition „Explorations. On the Poetry of the Material“. Its two spherical curves appear voluminous, the rich dark grey sets a clear accent in the many-metre-high atrium. The diabase has a power of attraction. Visitors pause, discuss, walk around the sculpture, admiring. Monika Majer has the joy of the interest in her work written all over her face. Yes, indeed: she is an artist!

After leaving school, the native of Hanau wanted to become an artist and sculptor, but the art academy in Stuttgart rejected her application: „Then a friend introduced me to a Stuttgart sculptor who said: ‚Girl, you’d better learn something good.‘  He gave me a travertine and a bucket of tools. I am still grateful for this encounter. I began an apprenticeship as a stonemason in the quarry at Melchior Natursteine in Freudental, laying a solid foundation for my professional future and my sculptural work.“

Always space for creativity
Monika Majer completed her training as a stonemason in 1995 as the best in Germany. This was followed by studies at the Academy for Design in Crafts in Ulm, for which she was supported with a scholarship to promote gifted students. Since graduating in 2000, she has been working as a freelance sculptor.
In 2001, she therefore set up her own business with her husband, master stonemason and stone sculptor Jochen Herzog. The couple renovated an old farmhouse in Kircheim/Teck. The barn became a workshop, the vaulted cellar a warehouse. Mainly local natural stones like KELHEIMER AUERKALK and Jura limestones were used. The small business established itself as the place to go for handcrafted gravestones.

From grief to art
While Jochen Herzog continues to run the company today, Monika Majer had a break in 2009. Several unexpected deaths occurred in her family and among friends. „We thought in the meantime that there would be no end to the dying. Gravestone after gravestone, Monika Majer said goodbye. Every piece was unique, every piece a last greeting, craftsmanship met with grief. The stonemason reached her limits: „When my father died and I made his gravestone, I decided that I couldn’t make any more gravestones.

It was during this time that Monika Majer came to adult education via her studies in intermedial art therapy. She taught teachers, educators and therapists basic design skills, the mediums of choice being stone and clay. „Through teaching, I was able to develop new approaches. But I missed out on the sculptural work – and that is actually the source from which I draw and give!“ Since 2019, she has increasingly turned to developing her own artistic work – unthinkable without craft experience, she finds: „I see craft as a means to precision, through which art becomes possible in the first place, and as the basis for my playful approach to the material. My way of approaching it resembles the work of a researcher.“

Distinctive style
Monika Majer’s sculptures, which manage without a fixed standing surface, bear her signature. Curves that invite you to touch them are just as frequent as perfectly modelled outer edges that taper to a point at the ends. And then there are the swinging sculptures, stones that can be easily set in motion despite their weight. One example can also be seen in Schorndorf. Tok, Tok, it goes back and forth ponderously and yet with mass, it’s as if you can hear a heart beating. „It’s not important what I want to achieve. It’s about what is hidden in the stone and essentially wants to come to light,“ is how the freelance sculptor describes the process of creating her works. She only attaches importance to the fact that the dynamics of this process are reflected in the finished form – flowing movements as if from one cast. She checks the coherence of the proportions by hand. By hand, she grinds. The eye, she says, cannot be relied upon here. She interprets cracks or holes as an invitation to rethink a goal that was set too early. Why not let the „imperfection“ become part of the whole?

Interest in cooperation
The artist’s curriculum vitae is increasingly filled with realised projects. She takes opportunities to get to know other countries, stones and ways of working. Only recently she was invited to Barcelona, where she was awarded second prize among 72 participants in an international sculpture competition. Immediately afterwards, the question arose whether the German artist would like to contribute a work for a sculpture park in Catalonia? In the meantime, a shell limestone sculpture by Monika Majer can be seen there. Until the beginning of August, an exhibition ran in the „Q-Galerie für Kunst“ Schorndorf. There she exhibited together with another artist who has turned to woodblock prints. Here the stone, there the print, colours and forms harmonised and therefore shared some areas of the presentation space. Monika Majer is always interested in cooperation. A construction engineer friend of hers put her in touch with a plant nursery: „Why not put a diabase in the front garden? She has also realised projects with an educational component. Together with the town archives, the literary advisory board and several population groups, she created a memorial for the civilian victims of National Socialism in Kirchheim/Teck.

Sculptures for the City Park
The clear goal, however, is the conquest of public space. Flowing, soft, tangible forms in the city park, in hospitals, on playgrounds, the mother of two grown-up daughters sees this as an added value for society: „Stones have a positive effect on their surroundings just by their presence. I am convinced that investing in art and aesthetics is worthwhile! I now have to convince investors of that.“ 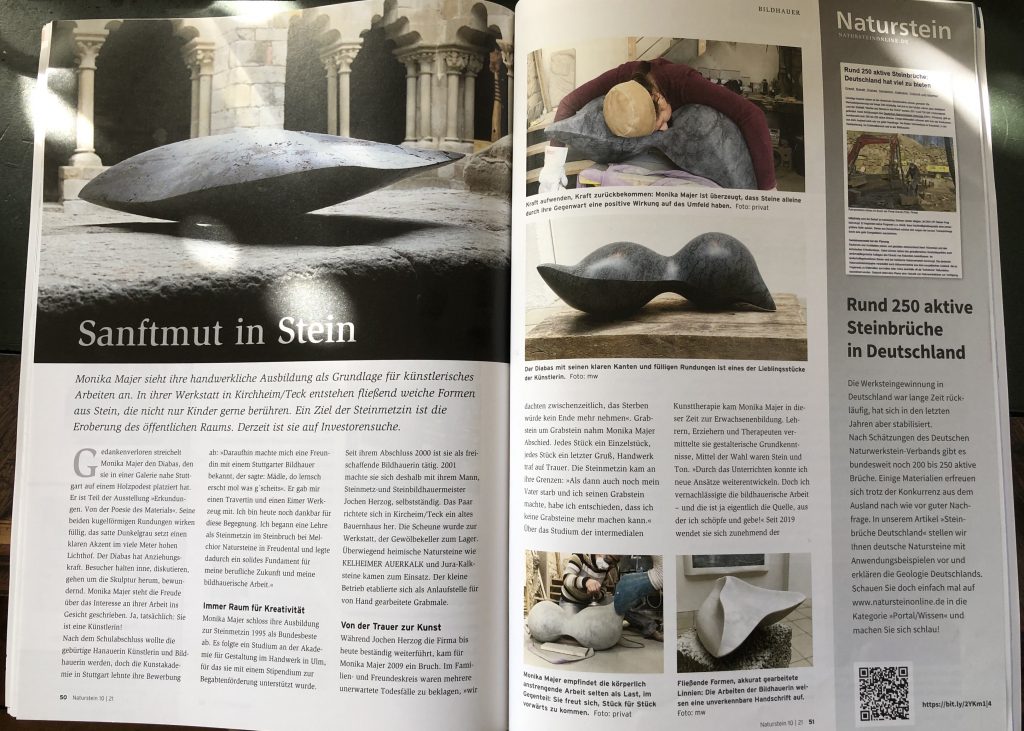